To share your memory on the wall of Shirley Butler, sign in using one of the following options:

Print
Mrs. Shirley Wofford Butler 70, passed away on Friday September 25, 2020 at St. Francis Hospitial. She was a daughter of the late George L. and Anita Foster Wofford.

Surviving: her husband, Donald C. Butler, Sr. of the home; one daughter... Read More
Mrs. Shirley Wofford Butler 70, passed away on Friday September 25, 2020 at St. Francis Hospitial. She was a daughter of the late George L. and Anita Foster Wofford.

Receive notifications about information and event scheduling for Shirley

We encourage you to share your most beloved memories of Shirley here, so that the family and other loved ones can always see it. You can upload cherished photographs, or share your favorite stories, and can even comment on those shared by others.

SkillStorm and Timothy Butler Geer sent flowers to the family of Shirley Wofford Butler.
Show you care by sending flowers

Posted Oct 04, 2020 at 12:31pm
Hello Wofford family! My heart is truly moved at the loss of your loving sister mom Aunt cousin friend neighbor and that sweet Spirit call Shirley Wofford Butler! Truly I know that she is already so missed and so dear to your heart! But be encouraged the days will get better as we go along. I love you all and I pray I apologize that I'm not there with you but my prayers are certainly in your corners. Feel free to call me anytime if you still feel, Laverne Foster O'Neal. 470 707 8530.
Comment Share
Share via:
DB

Posted Oct 04, 2020 at 11:57am
To the Wofford and Butler families: Arron and I are praying for your peace during this time. May you all cherish the wonderful memories of Shirley. Love, Arron & Denise Brown
Comment Share
Share via:
R

Posted Oct 03, 2020 at 05:53pm
My beloved other mother; may you forever Rest In Paradise;💖! God's strength, comfort, and peace always to my beloved family in the many days that follow after the calls, visits, and food from others cease. My love you will have with you today, tomorrow, and forever ❤!!!
Comment Share
Share via:
BR

Posted Oct 03, 2020 at 02:19pm
To ulunda and family we can see the Love, you posted about your mom ,and I know that she was very proud of you and the family we are thinking about you and lifting up our prayers and thoughts for you and your family Beverly Lewis Rowe and Family
Comment Share
Share via:
VS 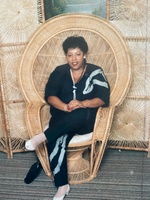