To share your memory on the wall of Kenneth Riley, sign in using one of the following options:

Kenny loved to drive, travel and interact with others so he decided to change careers and obtained a CDL License to drive a 18 wheeler truck across state lines which he did for many years, he enjoyed meeting new people, making new friends and site-seeing all the cities he was required to pass through. He later became an employee of ITS TRANSPORTATION COMPANY as a local truck driver and enjoyed working for the company immensely. Kenneth’s work ethic was impeccable and he formed great relationships as well as close friendships amongst his co-workers. He was also a devoted Christian and sang in the men’s choir @ Antioch Missionary Baptist Church where he met his good friend and mentor Rev. W. Calvin Murray, Associate Pastor.
Kenneth was always a gentle soul with a giving heart, his laugh alone could fill your day with joy. His willingness to help others and his humorous spirit will be dearly missed by his family and friends.
He leaves behind to cherish his memory his one and only son whom he loved unconditionally Taleel La Boone, Sisters; Gwen Bridges, Deborah Olivia Riley, Yvonne Clark (deceased). Brother-In-Law; Herbert Bridges, Lester Clark, Nieces; Roslyn Clark, Rachelle Farrell, Renee Bridges, Nephew; Ryan Clark, Nephew- In- Law; Anthony Farrell, Jasmine Laboone (Mother of Taleel), Cassandra Laboone (Grandmother of Taleel), a host of extended loving family members, very special friends and his work family @ ITS Transportation.
In Kenny’s humorous spirit he loved animals so he leaves behind Sheba Snow Farrell the family dog.
We would like to send a special thank you to Theodore McGee lovingly known as Brother & Rev. W. Calvin Murray for always supporting our beloved Kenneth Riley through his journey in Greenville, South Carolina.

Receive notifications about information and event scheduling for Kenneth

We encourage you to share your most beloved memories of Kenneth here, so that the family and other loved ones can always see it. You can upload cherished photographs, or share your favorite stories, and can even comment on those shared by others.

Posted Nov 20, 2020 at 08:03pm
He was a quiet but sweet spirited man always willing to help anyone and he smiled all the time he will be missed
Comment Share
Share via: 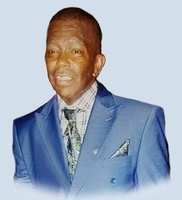