To share your memory on the wall of Jo Ann Davenport, sign in using one of the following options:

Print
Ms. Joann Davenport, 77, passed away on Saturday October 10, 2020, at St. Francis Hospital. She was a daughter of the late Odell Hutley and Margie Ross Guest.

Receive notifications about information and event scheduling for Jo Ann

We have provided a digital copy (PDF) of the Memorial Program that we supply at the time of the service. To Download this file please click the filename below.

We encourage you to share your most beloved memories of Jo Ann here, so that the family and other loved ones can always see it. You can upload cherished photographs, or share your favorite stories, and can even comment on those shared by others.

Flowers were purchased for the family of Jo Ann Davenport. Send Flowers

"WELL DONE THY GOOD & FAITHFUL SERVANT" Rest in heaven Aunt Joanne. Sending prayers of comfort and peace to the family. You're in my thoughts & prayers.
TF

Aunt Joanne had a big impact on everyone she met. Thank God she's resting in the arms of Jesus. Praying that God will be your source of comfort and strength.. The Jackson family 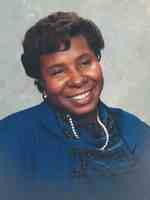